I’ve been obsessed with knitting lately… and loving it!

Previously, I’d only have about one to three project going at a time. This year that fell apart and it’s been bugging me most of the year. Well no more. Instead of being bothered by it, recently I have embraced it and started three more projects – all of which I equally enjoy knitting.

I know there is an ebb & flow to creative energy so I just riding this wave for as long as I can.

One project I am working on is the “Pass-through Scarf” from the Fall 2010 issue of Spin-off. The pattern is designed to work with handspun, but as soon as I saw the pictures (and checked the yardage), I knew I had the perfect yarn in my stash –

- Two skeins of Alpaca with a Twist’s Big Baby in the Lumberjack colorway. I’d been wanting to make a ribbed scarf with it and am so happy to be finally using it. (I bought it in 2008). 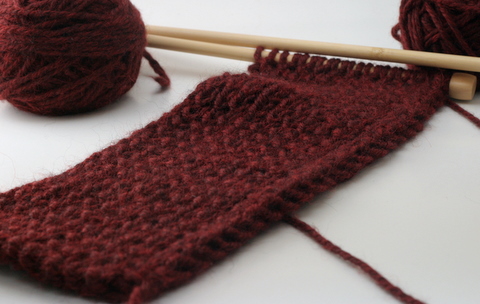 It’s SO soft and has wonderful drape.

The pattern calls for a provisional cast-on and I tried that. I’d never tried to knit from a provisional cast on and the fuzziness of the yarn made it hard to figure out what I was doing. Plus, I didn’t like how it looked. So I ripped it out and started over, despite being over 50% done. I just knew I wouldn’t be happy with how it looked. Since the yarn is bulky, I’ll be back to where I was in no time.

One thought on “knitting obsessed”