…Michael Jackson, who passed away a year ago on this date. I couldn’t let this day go by without some sort of tribute.

This video is one of my favorite performances of his – From the Bad tour in 1988 “Another Part of Me”.

Today was a good day. Spent the day with family, cooking, laughing, eating. Good times that I cherish.

Hope you day was good as well.

As I was trying to figure out what to write about, I suddenly thought to google ‘blog prompt’ and I found Creativity Portal.

They have this whole section of ‘prompts’ to spark your imagination and creativity. (See the list HERE)

I found the the Imagination Prompt of particular interest. My prompt? ‘Happiness is…’ and that’s very easy.

Perfectionism is a sneaky thing. You work on it constantly and yet, it keeps rearing it’s ugly head. All or nothing is a trait of perfectionism. Sometimes I can work through it, but often, I don’t realize it’s taken control. Just because I missed a day doesn’t mean I have failed, right?

Thank you, Sophie for the encouragement!

Ok … my main goal for December – get back to spinning. My own personal and unofficial NaSpiYaMo – ‘National’ Spin Yarn Month. Spin at least 10 minutes a day during the Month of December. I’ve worked so hard to learn and improve my spinning and I feel all that slipping away and I don’t like that. Anyone wanna join me?

I’ve taken 2 ounces of the eight ounces of black merino I bought and that’s what I’m going to work on first. I spun for a little bit yesterday. It was weird – I wasn’t totally in love with spinning as I had been the past few months but I didn’t dislike it either.

Another issue is that I messed up my bobbins. Majacraft has plastic bobbins – inexpensive but functional – and a couple of them were a little tight and I got a little over zealous with some sand paper and now they rattle.

The manual says to use vaseline on the flyer shaft if the bobbins do rattle but it did not help much. I ordered two more this past weekend and hopefully these will be nice quiet bobbins. One day I’ll invest in some wooden bobbins.

I hope you have a pleasant day.

Pay no attention to the outdated links my the sidebar. (I need to delete them) Instead, here a small list of favorite blogs that I visit often.

the blue blog – The perfect title for a blog. the very first knitting blog I ever remember reading. features knitting, quilting, sewing and general life stuff. (also the author of Charmed Knits)

The Weaving Studio – formerly ‘Cabin Cove’ – a blog by a very talented guy – lots of spinning, weaving, photography, cats, and a wee bit of knitting.

tiennie knits – truly an inspiring knitting blog. her photography of her knitting is great too!

the Akamai Knitter – another talented multi-crafter – spinning, knitting, jewelry & cross stitch are what I seen so far. Handsome cats make appearances as well.

a thing for string – another awesome spinner. Also has knitting and crochet.

And that’s just the tip of the iceberg of all the blogs I read. Maybe you’ll find a new one here that you’ll enjoy.

Thanks for stopping by!

November is not my favorite month. Enough so that I was considering not blogging at all in November. But I decided to do the opposite and challenge myself – Participate in NaBloPoMo and blog every day for the month of November.

So stay tuned tomorrow for Day 1.

This should prove interesting… or not.

It remains to be seen.

On June 6th, I thought I’d branch out and try a new craft. I took a class and ended up with this: 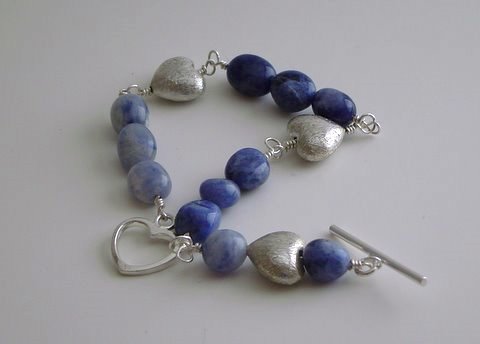 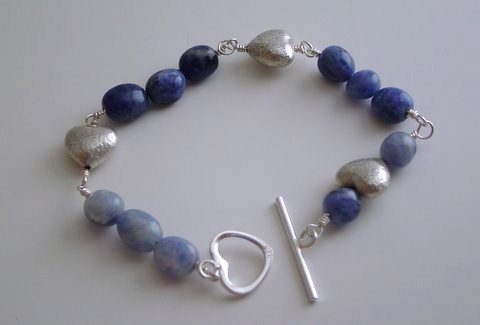 I most likely will rework this one and possibly make a necklace to match. But I had to take a picture for prosperities sake.

…and this past weekend I made these: 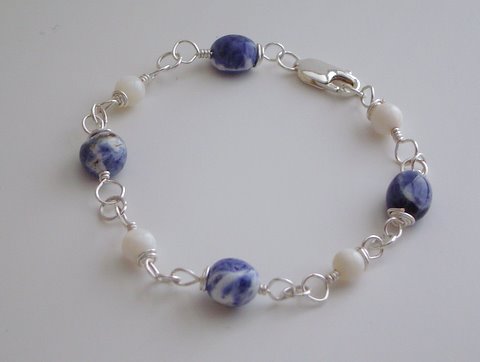 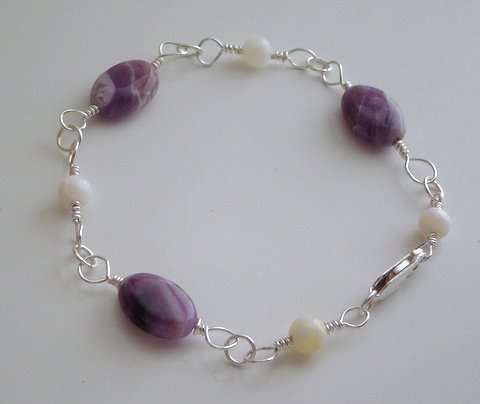 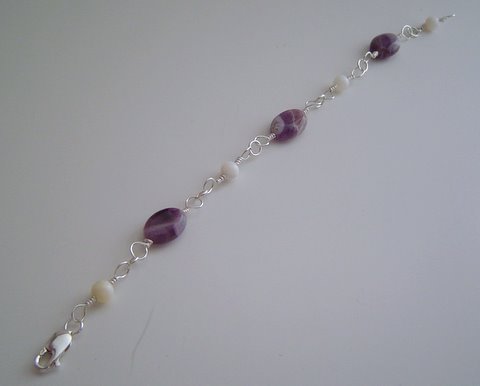 Exactly what I needed … another expensive hobby.

“When the ground is shaky beneath your feet… and you don’t know yet how to take the next step or how it will all work out, this is when we need our knitting most.”
~ Brenda Dayne, Cast-on: Episode 76 – Panacea

I have needed my knitting a lot lately, especially in these last 5-6 months. I’m writing to say that I’m still here… life has been really kickin’ my rear end so blogging hasn’t happened as much as I’d like.

However… a lot of fiber stuff has happened.

See? I have proof! 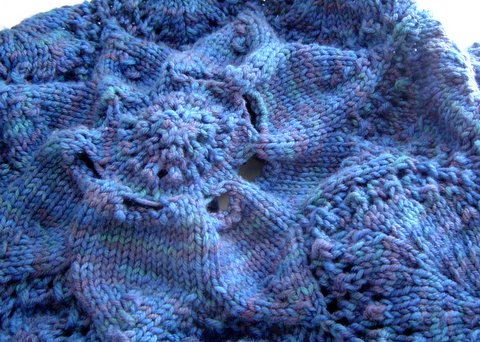 The Lady Eleanor Stole turned into a Hemlock Ring Blanket in progress. It’s Dream In Color ‘Nightwatch’. The yarn stains my bamboo needles so this might be the last time I use this colorway. But it’s a fun knit and much easier than it looks.

This post has nothing to do with knitting or spinning. And yet it is proof why I placed a moratorium on November. If something is going to go wrong, it can and will happen in November.

Picture it – two days before Thanksgiving. A friend and I were cooking Cheesecake (for the first time), trying to get it out of the way of other dishes we were going to cook for Thanksgiving. Everything was going well. We did the graham cracker crust. That looked great. We did the cream cheese filling … and put it in the oven for the specified time at about 350°F.

The next step has an additional topping using sour cream. We mixed that up while the first part was in the oven then we took out the cheesecake and put it to cool for the 15 minutes specified by the recipe and I turned up the oven (to 475°F).

Fifteen minutes later, I opened the oven greeted my flames at the bottom of my stove. Actual FLAMES!

I closed the stove as if some part of my brain thought if I closed it, I really hadn’t seen it… and almost in the same moment, common sense kicked in and I threw baking soda on it and the flames went out.

Turns out my spring form pan was leaking and it dripped to the bottom of the oven. …and this is the kind of thing that happened to me all of November, hence the moratorium. (The cheesecake didn’t quite gel the way it was supposed to but it sure tasted good…

and I will laugh about it… one day.

But amidst everything I bought some yarn, did lots of knitting and even a little spinning happened last month. I’ve been taking pictures and I can’t wait to share it all with you so please stay tuned!!

p.s. All my posts from October have disappeared for some reason so if you are wondering where those are, they are in the ether. I manage to get into Google cache and salvage them but it’ll take time for me to re-post them.

Found this here and I couldn’t resist sharing my results.

What Color Should Your Blog or Journal Be?

There has been attempts at both knitting and spinning. I dropped the spindle and had to rip out the knitting. Guess I’ll try again later.

…and neither does illness. Sorry for the no post last week. I’ve been not well this past week and couldn’t concentrate on knitting.

But in the moments I was feeling better, I did spin a little.

The color representation isn’t the best…

Keep a good thought and hopefully, I’ll talk with you soon. I’m going to lie down now.

have you seen my knitting mojo? I seemed to have misplaced it somewhere.

It seemed to have faded away while I was working on the 2nd heel for my pal’s socks, which is now frogged (no, not the whole sock… I was wise enough to put a lifeline in). The first heel went great – as near perfect as I’ve ever achieved.

Did perfectionism subconsciously take away my mojo? It’s entirely possible. Someone told me that it didn’t have to be perfect and I agree. But I want the heels to at least match. That’s not too much to ask, is it? I’ve put the socks away and I’ll try again when I’m in a better frame of mind and not feeling so discouraged.

Lots of knitting goin’ on behind the scenes. Pictures coming soon. Stay tuned!

I am in search of cotton or cotten blend sock yarn. I have never knit cotton before. Does any one have yarn recommendations? I’m looking for solid colors… I’ve looked at a few (like Panda Cotton & Meilenweit Cotton, just to name a couple) but am overwhelmed by the choices and various blends. (I’ve looked at Grumperina’s non-wooly list too…)

Any help or suggestions would be greatly appreciated!

Ok, I’m at work … I’ve been bringing my knitting with me to work on at lunch and I didn’t do that today. A most unsettling feeling … not knowing what to do with my hands!

*sigh* I think I’m in a creative slump. Anything creative I’ve tried to do over the last week has been horrible and frustrating. So if you see my creative muse, could you tell her to come home please? I miss her.

I leave you with this:

What kind of knitting needles are you?

You are bamboo.Warm, cozy, and thoughtful, you take your time and enjoy how things feel, smell, and taste. You love the craft and beauty of traditional things, and you value the comfort and experience of knitting as much as the results. But while you are reveling in your warm cozies, don’t get stuck. Warm is wonderful, but so is the whole wide world!
Take this quiz!