I’ve been hard at work on the Sherman Style short row heel (I just discovered it on Tuesday)… but before I talk about that, I want to share something I’ve discovered in the process. I have been doing the purl stitch in such a way that it ends up on the needle backwards, causing me to have to knit from the back loop in order to not have twisted stitches. I’ve been knitting for a year and I only noticed this last night. To be fair, most of the projects I’ve worked on have been either garter stitch or stockinette in the round.

What this means is THIS SCARF has a bunch of backward stitches and no I’m not ripping it out. What this also means is that working on this scarf will be much easier so there’s a better chance of finishing it soon.

The colorway of the scarf is one of Dave’s earlier works. It’s 100% Australian Merino wool and so soft. Softer than the sock yarn. I’m so glad I have two more colorways of this yarn ’cause it’s such a pleasure to work with. I think I’ll be finishing this scarf sooner than later.

YAY! as I was typing this post, the mail carrier handed me my recent purchase from Cabin Cove Mercantile. Yippee!!! Soon I’ll be holding the Summer Sky in my hands!

Ok … back to the short row heel. Here it is: 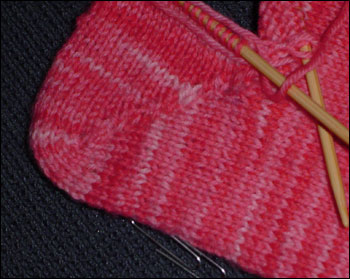 This picture is a little deceiving … it makes it look better than it actually is. This is the better side, what you can’t see is as big hole at the base of the heel. and I forgot to pick up the wraps at the top of the heel. And the other side is not very attractive – I did have to rip it out twice before getting to this – the first time, after I realized the problem with my purl stitch, I ended up with a nice ‘ladder’ down the center of the heel. *rolls eyes* But this is supposed to a learning experience so hopefully, what I learned will help when I start working on the 2nd heel.

That’s it for now. Thanks for the nice comments on my previous post!

Hope you have a great day!!!

2 thoughts on “You learn something new everyday…”